The Hazel Tilton Park War Memorial, was originally a structure honoring solely those Jacksonville American soldiers lost during World War I. The war concluded November 11, 1918, a day then referred to as Armistice Day and now memorialized as Veteran’s Day.

The task of raising money for the monument was spearheaded by the Jolly Workers Club, an organization of young working women in positions of responsibility around Jacksonville. The club was composed of twenty-four members. In 1924, they contracted for the monument and raised $900 toward that end. The statue, carved by an unknown Italian sculptor and hewn from Italian marble, was completed and delivered. However, it was not erected because another $400 was needed for the inscription of names and erection costs. Unfortunately the Jolly Workers Club disbanded in 1926, and the memorial statue was left abandoned in the lobby of the then Guaranty State Bank.

In 1928, the Jacksonville Progress began a series of wrenching articles aimed at shaming the public and local government to raise the needed funds for the monument’s completion. One essay stated that the lack of completion “…stands as an accuser of tragic neglect on the part of the citizens of Jacksonville.” Finally, the Civic Committee of the Jacksonville Chamber took over the project and the City Council got on board as well. Checks and cash began to flow and eventually the needed funds were finally raised. The statue was erected on a plinth of Colorado marble and stood twelve feet high. The local J. E. Gould Monument Company (founded in 1908) was in charge of erecting the statue and engraving all needed inscriptions.

The main day for the Memorial Statue inauguration was April 15, 1928, a beautiful Sunday, at 3:30 PM in the Jacksonville City Park. Attending were the Boy Scouts, former Jolly Worker Club members, and the Jacksonville Municipal Band, along with a host of interested citizens. Mayor T. E. Acker delivered a short historical address. A local black minister spoke briefly thanking the city for inclusion of five fallen African American soldiers. The grand moment came when Mrs. T. M. Clairborne, the Gold Star mother of Jimmie Walter Clairborne- the first soldier to fall- unveiled the statue.

The statue itself depicts a uniformed soldier holding a Springfield 1903 (30-06) model rifle with fixed bayonet. He wears a hip length coat with artillery belt, a helmet, and puttees to protect the ankles. The state of Texas suffered 892 deaths attributed to World War One. From that number the names of thirty-two Jacksonville men are inscribed on three sides of the statue’s base, all lost in the Great War.

The white marble statue of the Dough Boy endured much over the years from the indignity of being sprayed green during the mid 1950s (by several high school boys who will go unnamed!), to its near destruction from horrific winds in 1990. It was after this that the concept of a new memorial at a different site in the park was contemplated, one that would represent not just Jacksonville but the entirety of Cherokee County in all wars fought where lives were lost.

Therefore, in 1992, the original WWI monument (1928) was transferred to its new location in the Jacksonville City Park and rededicated as the Cherokee County War Memorial. In anticipation of the new memorial and relocation, the WWI statue, which had been partially destroyed by high winds in1990, was repaired. Three large black granite walls were erected on white marble foundations adorned with the names of the Cherokee County fallen in World War I (24), World War II (139), Korea (9), Vietnam (22), and Iraq (1). The major inscription reads: “In Memory of All Cherokee County Veterans Who Served With Honor In The Armed Forces of The United States of America.” Symbols of the services surround the inscription.

It was a grand affair planned by the Veterans of Foreign Wars, Post 3984. The ceremony took place on Saturday, May 30, at 2:00 PM. A flag ceremony was executed by the National Guard and the national anthem was sung by recent Jacksonville High School - Jacksonville ISD graduate, Jason Harkins. All of this was highlighted by a twenty-one gun salute along with a somber rendition of “Taps”. The Reverend Grady Higgs, pastor of the First Baptist Church Jacksonville Texas, delivered the invocation, while the benediction was given by Reverend Karl Hockenhull of the Sweet Union Baptist Church.

Attending the ceremony and calling aloud each name on the monument, was Cherokee County Judge Craig Caldwell, a Vietnam veteran of the 101st Army Airborne. US Congressman Charles Wilson (1933-2010) delivered the major address. Rep. Wilson was a Naval Academy graduate and twelve term US congressman representing the Texas second congressional district. He is best known as the subject of the book and movie entitled Charlie Wilson’s War. The movie starred Tom Hanks as Charlie and Julia Roberts as his benefactor.

The City Park, where the memorial is located, began as a public square donated by the International Railroad when the town of Jacksonville was first laid out shortly after 1872. In 1882, a train track of the Kansas and Gulf Short Line Railroad cut through the park area and will remain, though eventually unused, for several years following 1928.

Other structures were located in park during those early years. A water tower was built in 1906, and a small fire station and pine-slab jail existed for a short time. Tree planting began in 1882 directed by Captain H. L. Morris. One of these trees, a magnolia, was eventually referred to by locals as “The Tree of Knowledge” because the town elders would gather beneath the tree on benches to discuss important affairs. It is possible that the large magnolia near the front of the new fire station is that same tree. A wooden bandstand erected in 1907, was replaced by native stone during the 1930s by the Worker Progress Administration.

The park represents an important place in the history of Jacksonville and the War Monument is its center. While the monument is made of cold stone it is etched with real names of real people who loved and were loved. Reflecting upon this public stone, we can better understand both the private loss as well as the concept of duty. 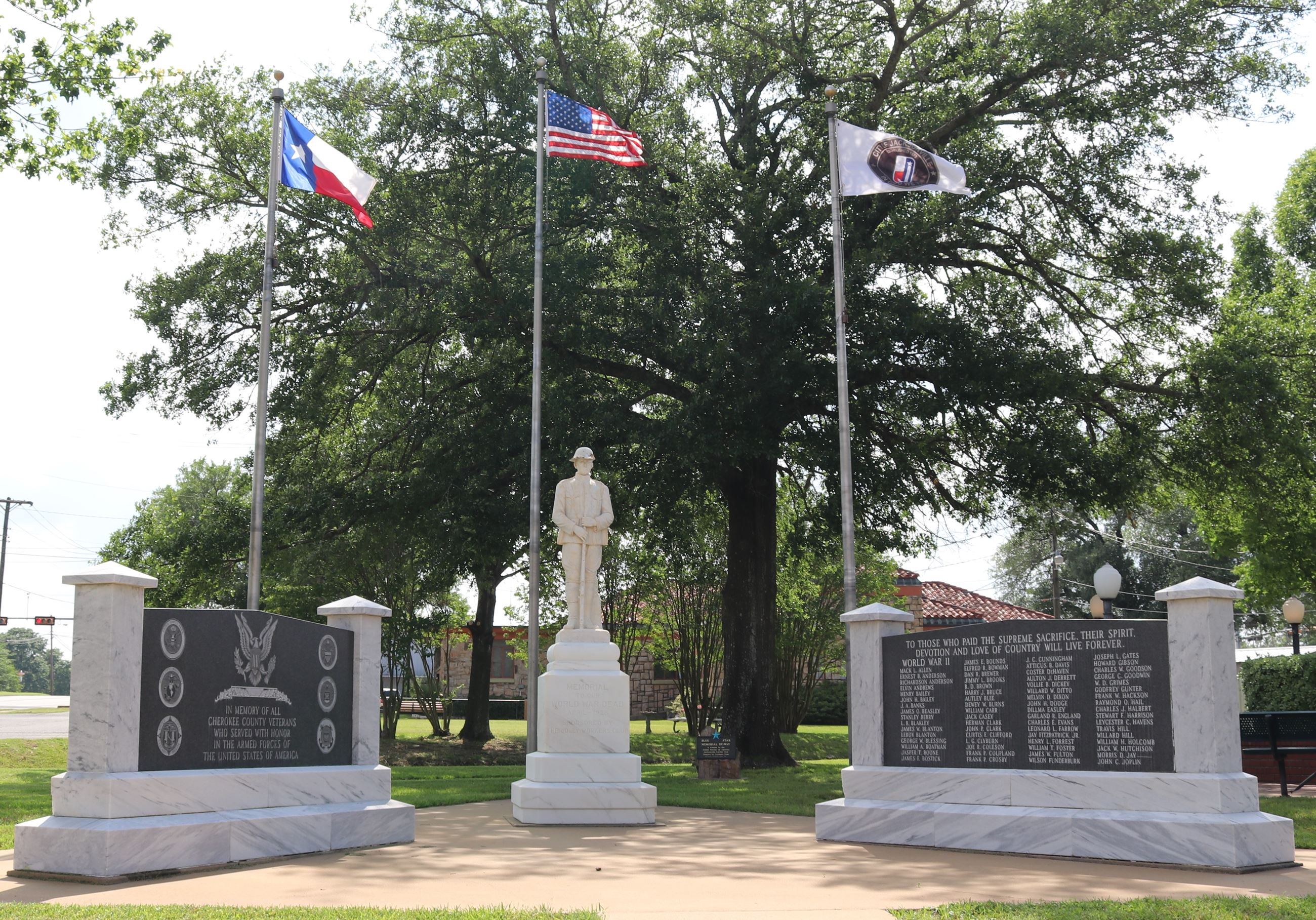