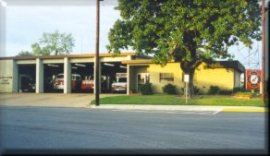 For many years, Jacksonville had only two fire trucks that were housed at Kiesow’s Garage, and were later moved to the City Hall building.  In 1964, when the municipality and the Texas Bank and Trust traded locations, the first fire station was built in City Park at 301 South Main Street with a garage designed to hold four fire trucks.  In 1965, Station #2 was built on North Bolton Street, with a truck and crew available on both sides of the Missouri Pacific Railroad. On April 28th, 1980, Station #3 was opened on the Loop with expected growth on the East side of town. Station #2 was later closed in March of 1984, after completion of the overpass and the city was no longer receiving credit for it on the key rate.  It was then that Station #3 on the Loop was renamed to Station #2.  Today, the Central Fire Station is equipped with a pumper, three ambulances and administration response vehicles.  Station 2 is equipped with a pumper, an Arial ladder truck/pumper, an ambulance and a brush truck.

While a pull cart was in service, Frank Collins fell and was run over by the cart.  He died from his injuries.

Captain Kevin McKinney passed away on November 17th, 2014 after a long battle with Non-Hodgkin’s Lymphoma.  Captain McKinney was a career firefighter of Jacksonville for 31 years.  The State of Texas received several studies of career firefighters over 21 years of service showing they were more prone to contracting Non-Hodgkin’s Lymphoma by a substantial percentage.  After Captain McKinney’s passing, the State of Texas declared his status as a Line of Duty Death.

ACQUISITION OF THE AMBULANCE SERVICE

In 1983, the Newburn Ambulance Service transferred all the company’s fleet to the City of Jacksonville Fire Department.  Several members of the fire department parted ways with the city when this occurred, and those that remained sought out Emergency Medical training and education.  For the time period, this was considered a very progressive and effective way to fully operate a municipal fire service, and shortly after, several surrounding East Texas cities adopted the same operation.