About 15 minutes North-West from Downtown Jacksonville, the Killough Monument is a memorial to a sad event in our history. According to the Texas State Historical Association, "The Killough Massacre, said to have been the largest single Indian depredation in East Texas, took place on October 5, 1838, near the site of present Old Larissa in northwestern Cherokee County. The eighteen victims included Isaac Killough, Sr., and members of his extended family, who had immigrated to Texas from Talladega County, Alabama, the year before.

On Christmas Eve 1837 Killough, his four sons, his two daughters and their husbands, and two single men, Elbert and Barakias Williams, settled on what is now known as Killough Creek, seven miles northwest of Jacksonville. The land was part of a larger tract originally granted to the Cherokees under Sam Houston and John Forbes's treaty in 1836. The treaty, however, was nullified by the Republic of Texas Senate in December 1837, and portions of the land were sold to the Killoughs and other settlers. The rescinding of the treaty and the growing incursions of new settlers from the Old South provoked bitter resentments in the Indians and laid the basis for the uprisings in 1838. During the early part of that year the Killough group built houses, cleared the land, and planted crops. But in August, when the corn was ready to harvest, they received news of a growing insurrection of disgruntled Mexicans and Indians in the region led by Vicente Córdova, the former alcalde of Nacogdoches. Córdova, collaborating with Mexican officials on the Rio Grande, plotted to retake Texas by inciting the Indians to attack the English-speaking settlers, a move they hoped would open the way for a invasion by the Mexican army. The Córdova Rebellion, as the plan was called, never materialized, and the insurrection was quickly suppressed by a hastily organized militia led by Gen. Thomas J. Rusk.

Killough and rest of the approximately thirty settlers, fearing Indian attacks, had in the meantime fled to Nacogdoches, but they returned in late September or early October believing it would be safe to harvest their crops. One later report alleged that the Indians had agreed to allow the Killough group to remain until the "first great white frost." On the afternoon of October 5, however, a hostile band attacked the settlement. Eighteen of the settlers, including Isaac Killough, Sr., were killed or carried off.

The survivors, including Killough's wife Urcey, eventually made their way to Lacy's Fort, forty miles to the south. William Killough, who made the journey to Ft. Lacy as an infant on his Mother's back, told the story of their trek as it was told to him: "When night came they started for Ft. Lacy, travelling as best they could, as they had to leave the path often as Indians were coming up all through the night. There was one serious drawback to them- one that might have proven fatal to them at any time. They had an infant one year and eight days old, and a small fist dog along. The cry of one or the bark of the other would have been fatal, but it seems (we) both knew that there was something wrong, for when they would stop the dog would hover under their skirts like he was trying to keep out of danger. In starting, they did not know what to do with the dog. They could not leave it, and didn't have the heart to kill it, nor anything to kill it with."

Word of the massacre quickly spread, and a militia led by Rusk set out to find the perpetrators. After reaching Fort Houston, near the site of present Palestine, they received word that the band was camped at an old Kickapoo village near Frankston. The following day Rusk and his men attacked. In the skirmish that followed eleven members of the band were killed, including a renegade Cherokee named Tail. The exact composition of the Indian group is not known, but Gen. Hugh McLeod, a participant in the battle, later wrote that the band included Caddos, Coushattas, several runaway slaves, Mexicans, and possibly Keechis. The survivors of the massacre claimed that they saw a white man dressed as an Indian, but the claim was never substantiated.

The Killough Massacre and its aftermath represent a final chapter of the Córdova Rebellion, but the deep-seated resentments aroused by the abrogation of Houston's treaty and the incursions of new settlers led to the Cherokee War the following year. A stone obelisk to commemorate the victims of the massacre was erected at the site by the Work Projects Administration in the late 1930s, and in 1965 a state historical marker was dedicated there. The monument and cemetery are now enclosed by a fence, and descendants of the Killough family have established a foundation to provide permanent care." 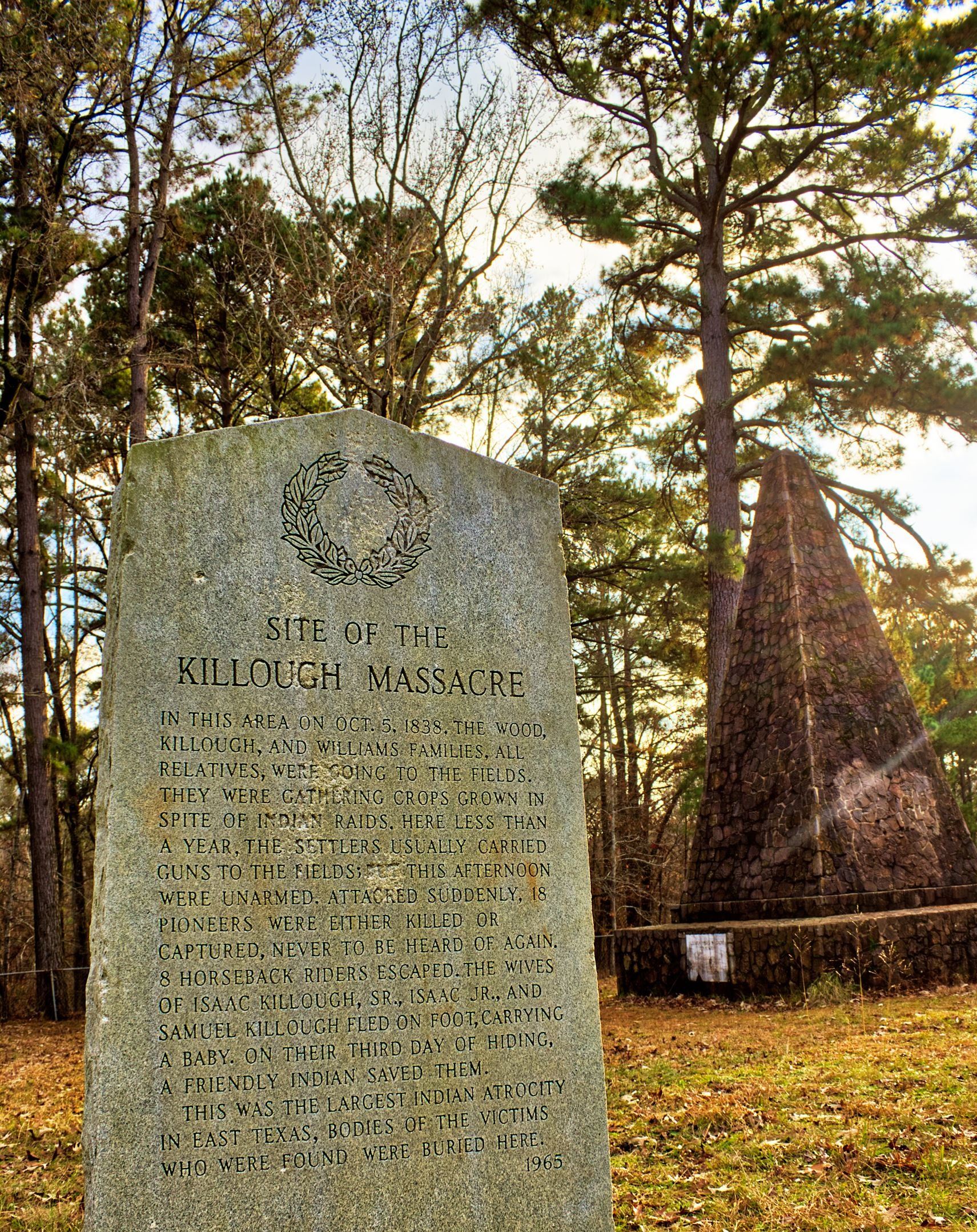